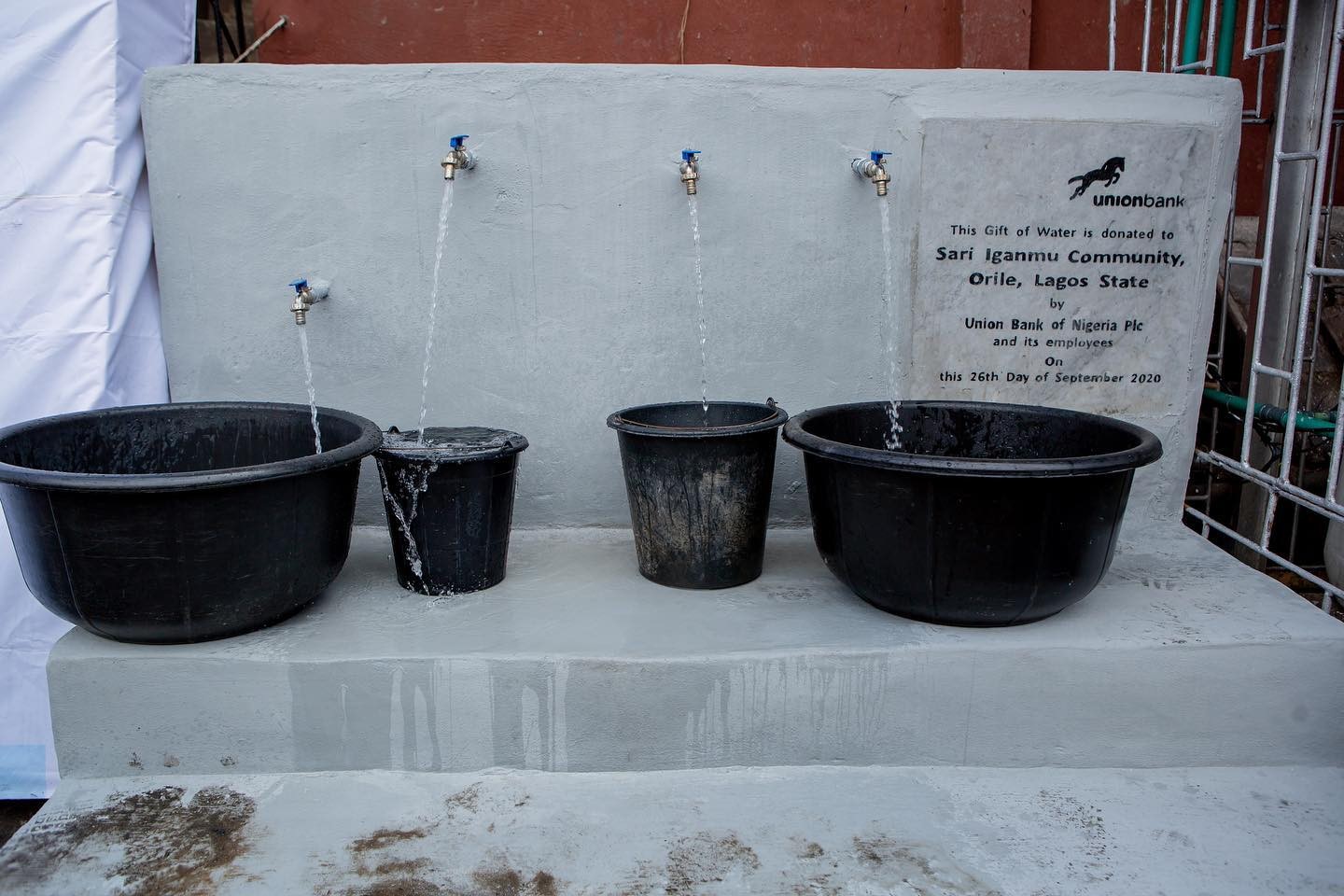 This report covers activities covered for 2020.

In a bid to spread the impact of “clean potable water for all”, we partnered with the following individuals, their names are below.

One of the strongest, biggest and oldest bank in Nigeria, Union Bank PLC selected Haske Water Aid and Empowerment Foundation to implement six boreholes in six geopolitical zones in Nigeria. This projects benefitted 15,000 people, improved sanitation and help reduced the spread of Covid19. The first six projects listed below were sponsored by Union Bank Nigeria.

This community comprises of 6,000. They are majorly farmers. The village has bad road access.

Their source of water is erosion and river water. The community dwellers are exposed to water-borne diseases and this causes untimely deaths among the pregnant women and children, since there is no health centre, neither do they have any source of electricity nor network communication in Ohubu community, in Ama Nkanu, Nkanu East. The water motorized borehole provided water potable water to improve their standard of living. 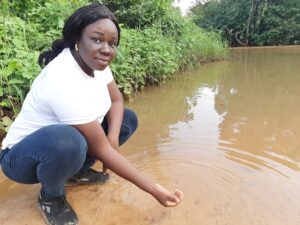 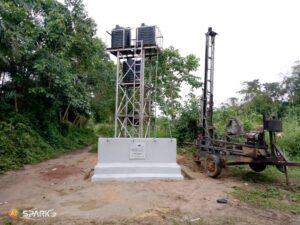 The people of Garin Lamido, Gausiya and Abujas Amare live around Gashua metropolis which is located at Yobe north of Nigeria. The above-mentioned areas were rated as the most populated which covered about 1/3 of the total number of people living Gashua. It was reported that most of their problems are associated with their population, drought and water scarcity. A source from one of the households named Mallam Umar said, “ a breastfeeding mother has to walk for 1.5-2.0km to fetch for domestic uses. The water crisis in the community has being the main issue in the area, where people in the community lack access to sufficient water supply, hygienic, and clean water or both. In a nutshell, inadequate water supply is the main problem in the community.

According to the report by the local Ward head 17,000 people of the communities population which is equivalent to 65% live with water stress. Most of them live Abujan Amare near cemetery, the water crisis makes the people in that community to spend almost half of their day without water supply for their domestic purposes. They go far to fetch water from private and owned borehole and the water is salty and so due to the saltiness of the water leads infections with some diseases like typhoid and others. The new borehole has helped to solve their water challenges. 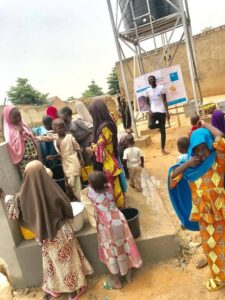 The Sari Iganmu community is made up of 5 CDA’s. It is densely populated. Getting access to potable water has been a major challenge to them over the years and the water intervention from Union bank is an answer to their prayers. Their only means of getting water is buying from vendors which is not easily available and affordable to everyone and this leaves them no choice but to resort to drinking and cooking with well water(for those who have well in their compound). This well water is allowed to settle(in most cases they use alum) after it is fetched to allow all the residues gather below so that they can take from the top and dispose the bottom. Because a lot of people fetch from the well, the well dries up faster than the expected time.

Women and children play a very important role in these communities because they are the ones who handle the responsibility of making sure they go to source for water. During water scarcity, they walk very long distances to look for water to buy and this leaves the children no option but to miss school on those days.

We visited the Baale who has been in power for the past 22 years .He was happy the water intervention happened in his time. 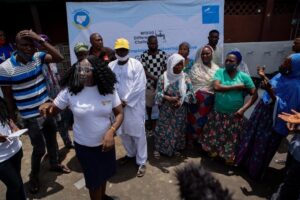 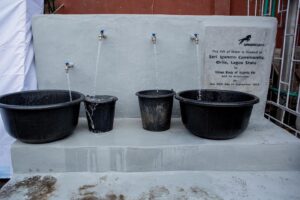 Enugu Iyi is an indigenous community in Ubulu Uku, Aniocha South Local Government of Delta State, Nigeria. The major occupation of the people is peasant farming with over a population of 2000 persons.

The health and other life-threatening situations surrounding their lack of access to clean water have given rise to a call for intervention. According to their traditional ruler, the Okwa bani of Enugu Iyi, the bad situation of their only source of drinking water has continuously exposed their children to water-borne diseases such as cholera, diarrhoea, typhoid etc. It is also regrettable that the community has no access to good public health care centre to save the lives of their children.

The only source of drinking water in this community is a pit, which dries up during the dry season and sets the community in search for water in a long distant location into the bush. This in turn sets the women and girl-child at risk of rape in the bush. Alternatively, their men could occasionally hail a bike to the town just to purchase 1 gallon of water at the cost of N20 naira, and N200 for transportation.

The community happily gave Haske Water Aid and Empowerment Foundation access to any portion of their land for geophysical survey as long as water can be found there. They pledged to collaborate to protect any water intervention project in their community. 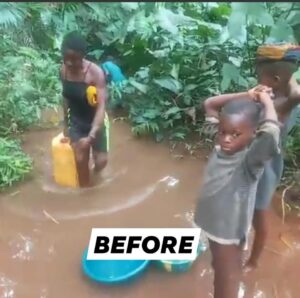 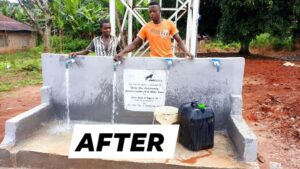 This borehole project is cited in LEA Primary School Kpebi-Sarki, located in a village Settlement called Kpebi-Sarki which is about 20km from ECOWAS Secretariat, Abuja. The school lack basic water supply and the pupil have to source for water from nearby houses, while some walk back to their homes or a nearby stream/river channels to get drinking water. The project will directly benefit the current population of the school which is 300 persons. Also, the borehole will benefit the entire community of Kpebi-Sarki district which has a population of over 5,000 persons. 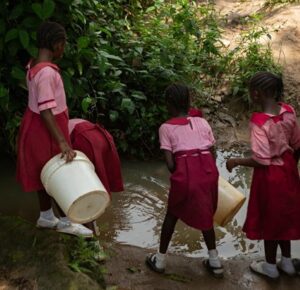 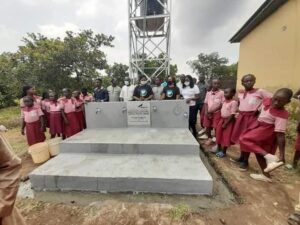 The villagers fetch water from the stagnant water that’s about 3_4km walk away from the village.

During the school session, most of the children are been sent to hawk petty things in other to raise money to get water from the rich fellow’s compound. when the well gets dry  they have to walk at least some miles to the stagnant water to fetch, after which they have to put alum and allow it stay for some days before consumption. Sometimes animals still drink from the stagnant water and yet during summer this villagers still fetch from there. They were grateful for the hand pump which benefits about 3000 villagers.

This young woman was very resilient and Haske Water Aid and Empowerment Foundation is glad to have supported this huge project.

Access to potable water for several domestic uses as well as for drinking has been a challenge faced by residents of the Samaru community as highlighted by the community head (Mai Ungwa) and is one that requires urgent attention.

They experience inadequate water supply to cater for the daily need of the teaming population of the community as is evident by the rationing of water (sometimes three times a week and in dire cases non for days).

The new borehole benefits about 500 persons. 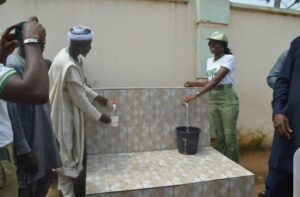 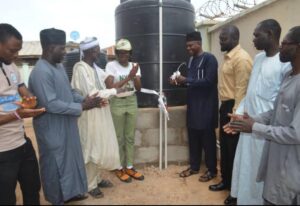 The community is made up of 4 villages and has a population of over 2000 people mostly women, children and the elderly. The only public source of water supply for the community is the Idodo River. The community has never had a borehole (private or public) constructed for them before either by government or private organizations. Only very few privileged households has private wells which is not open to use for the other members of the community. The Idodo river serves as the communities sources of water for drinking, cooking, bathing and washing. Some members of the community walk several miles to get to the river, these are mostly women and children with severe difficulties this poses for them. The elderly mostly women, who cannot come to fetch water from the river have to pay young men with a motorbike to fetch water from the river for them. The same water used for drinking without any treatment is where the villagers ferment their cassava (used for fufu production) for up to seven days and also sieve the fufu inside the river all of which flows down to where they are being fetched for the purpose of drinking and cooking. In the midst of the public health risk and challenge posed by drinking and using such highly polluted water, the only health facility in the community is not operational. 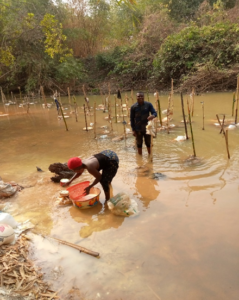 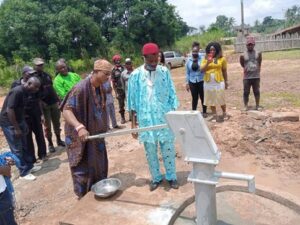 We organized two online training to teach young people how to access global opportunities, win scholarships, etc. It was very impactful. We partnered with RETTI for the second training. 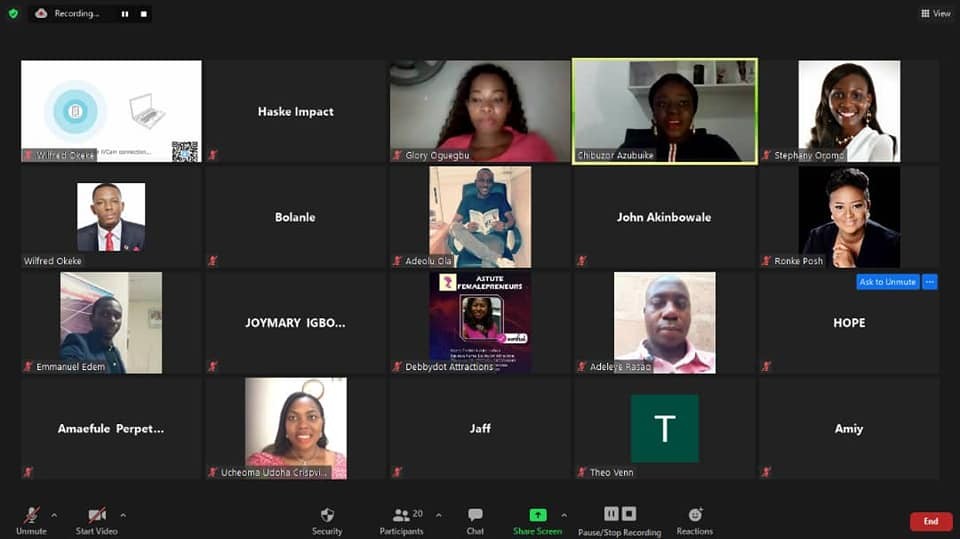 On behalf of the entire members of the Haske Team, I say a big thank you, you made 2020 a great year of spreading impact, regardless of challenges caused by Covid 19.

Your donation can provide life to a community in need of water in Nigeria. Let’s give them hope.